Composition by Lara Sarkissian
Video by Jemma Woolmore
Media: 6 channel video and 50 channel sound installation
Duration: 18min
Commissioned by the Institute for Sound and Music Berlin for the ISM Hexadome

Thresholds is a multichannel sound and video installation piece commissioned in 2018 by the Institute for Sound and Music Berlin for the ISM Hexadome alongside artists such as Brian Eno, Ben Frost + MFO, Holly Herndon and Thom York +Tarik Barri.

Thresholds creates a transsensorial space for storytelling on topics of territory, recognition and memory. Together musician Lara Sarkissian and artist Jemma Woolmore craft an immersive experience from aural and physical architectures; playing with disorientation, stability, unrest, familiarity and recollection.The piece is an ambient electronic landscape referencing Armenian music, field recordings and churches (both in its sonic and physical form); as the architecture of churches have often been designed with the intentions of acoustic ecology and spatial experiences in mind. The score collages elements of voices, hymns, instruments; holding space for modern day Armenian narratives tied to uprooted ancestral pasts [and present].
The Hexadome screens become a landscape to be navigated and divided, creating symbolic borders that are enforced, blurred or dissolved throughout the work. Patterns emerge that appear to both isolate and encompass, generating complex and unfamiliar territories, exploring the fragile boundary between Utopia and Dystopia.

Thresholds is a collaboration with USA/Armenian musician Lara Sarkissian. We developed the project through a series of online meetings and a regular exchange of ‘in-process’ material.  I created mood-boards, concept diagrams and many iterations of storyboards to make tangible the ideas I had for the visual side of the project.

Lara brought a strong connection to Armenian culture through her musical approach.  We discussed  current and historical  wars and border disputes in Armenia and the cultural loss when important places – such as ancient churches – no longer lie within what is defined as Armenia. Highlighting the arbitrary nature of border lines and their disregard for lived cultural experience. The red country outline of google earth became a motif throughout the work at times rigid, at times flowing, alluding to the impermanence and fluctuation of human-defined territories.

The acoustic ecology and architecture of churches was an important departure point for us both.  I tried to capture the quality of light that fills churches and made many tests in Blender simulating different lighting effects.

Over all I used many digital video tools including the filming of material textures, 3D simulations in Blender, repurposing of live tools Resolume and Mad Mapper to create certain effects and recording the output,  animation in  After Effects + overall compositing of all the elements.

I wanted to use all the screens as one continuous landscape. This meant envisaging the work across 6 screens at once, as can be seen in the storyboard example. The uniqueness of the Hexadome structure was difficult to work with.  We had virtually no access to the space for testing beforehand which meant that we had to imagine how the video and sound in our computers would play out across the immersive space.

The ISM Hexadome  is a newly designed audiovisual architecture that creates an immersive 360° environment combining the ‘Klangdom’, an advanced multi-channel speaker configuration created by ZKM | Institute for Music and Acoustics within a visual projection architecture designed by digital media studio, Pfadfinderei.  For the premier event series in Berlin at the Martin Gropius Bau nine separate works were commissioned by a range of sound and visual artists.  The ISM Hexadome exhibition is scheduled to travel internationally taking these nine works and adding new commissions along the way. 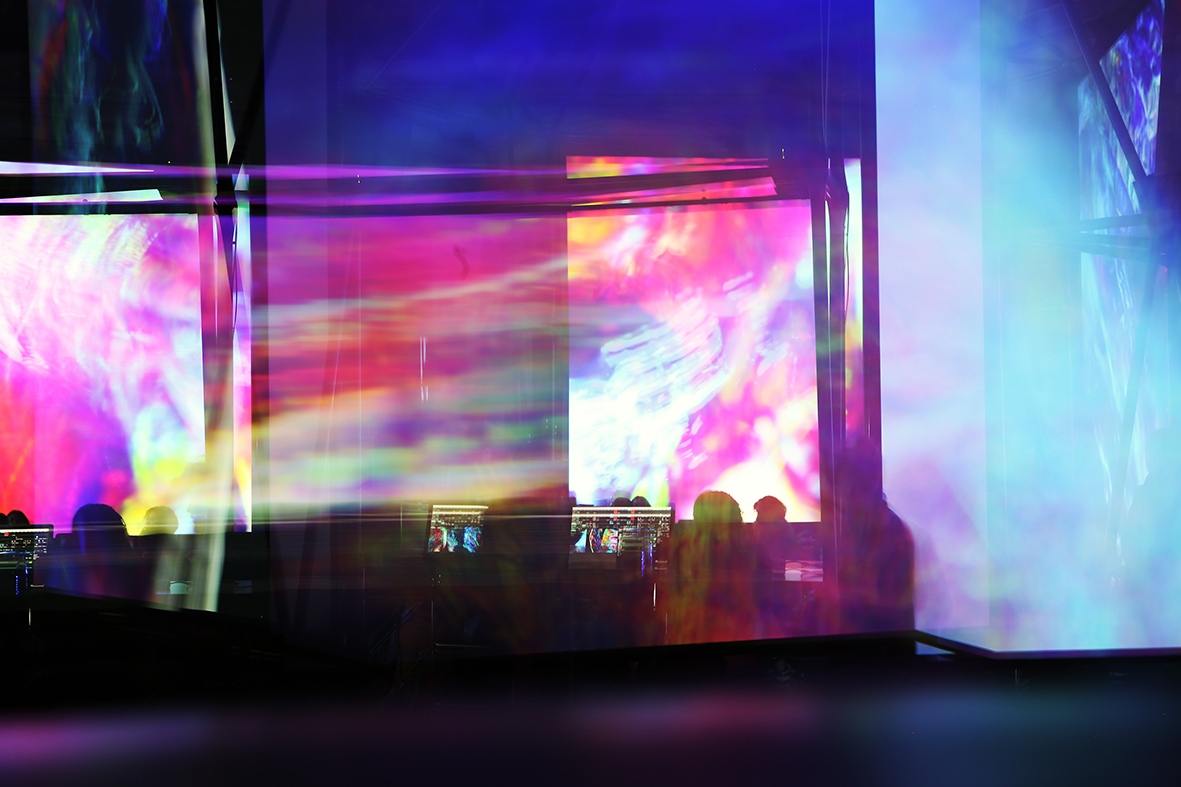 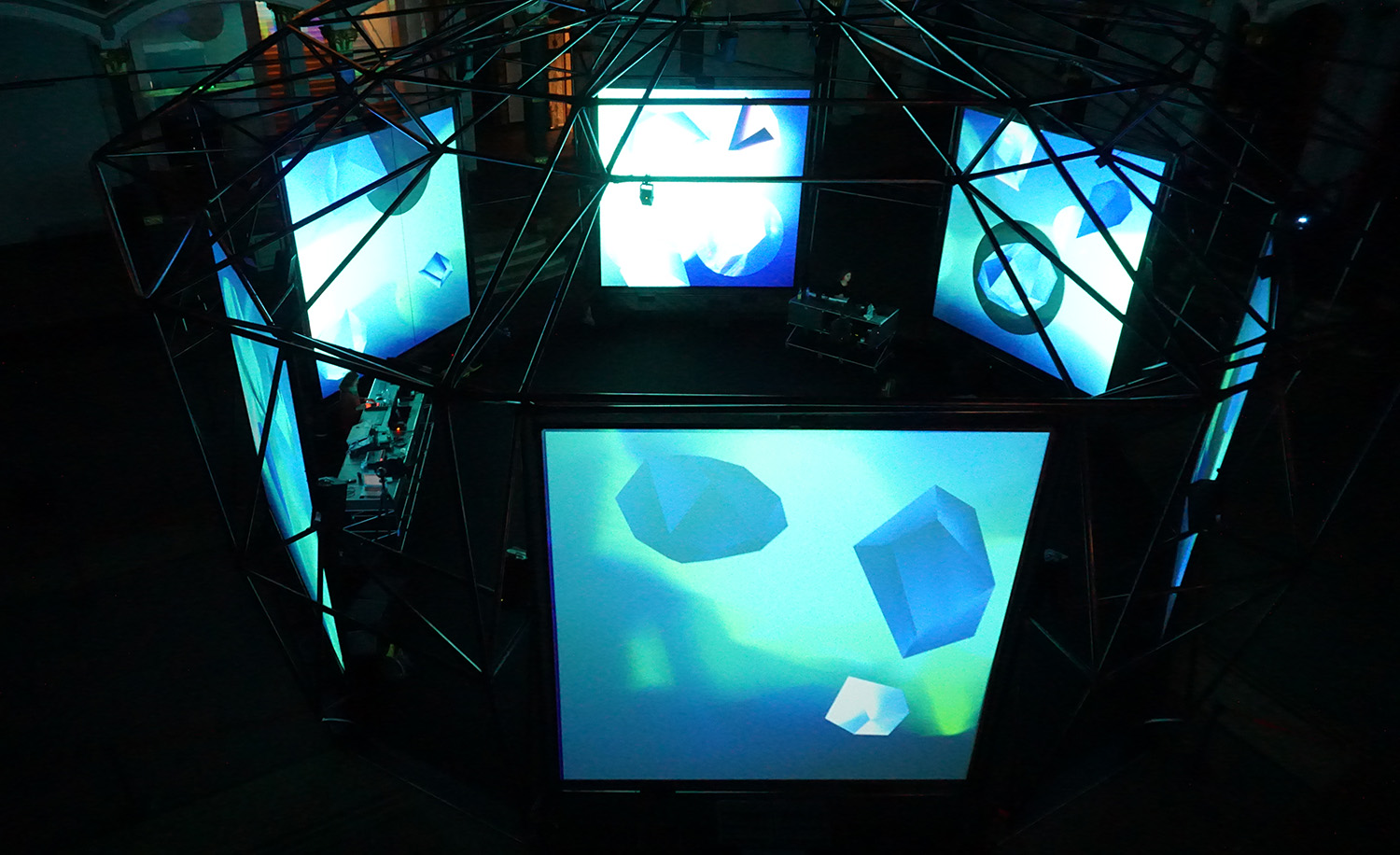 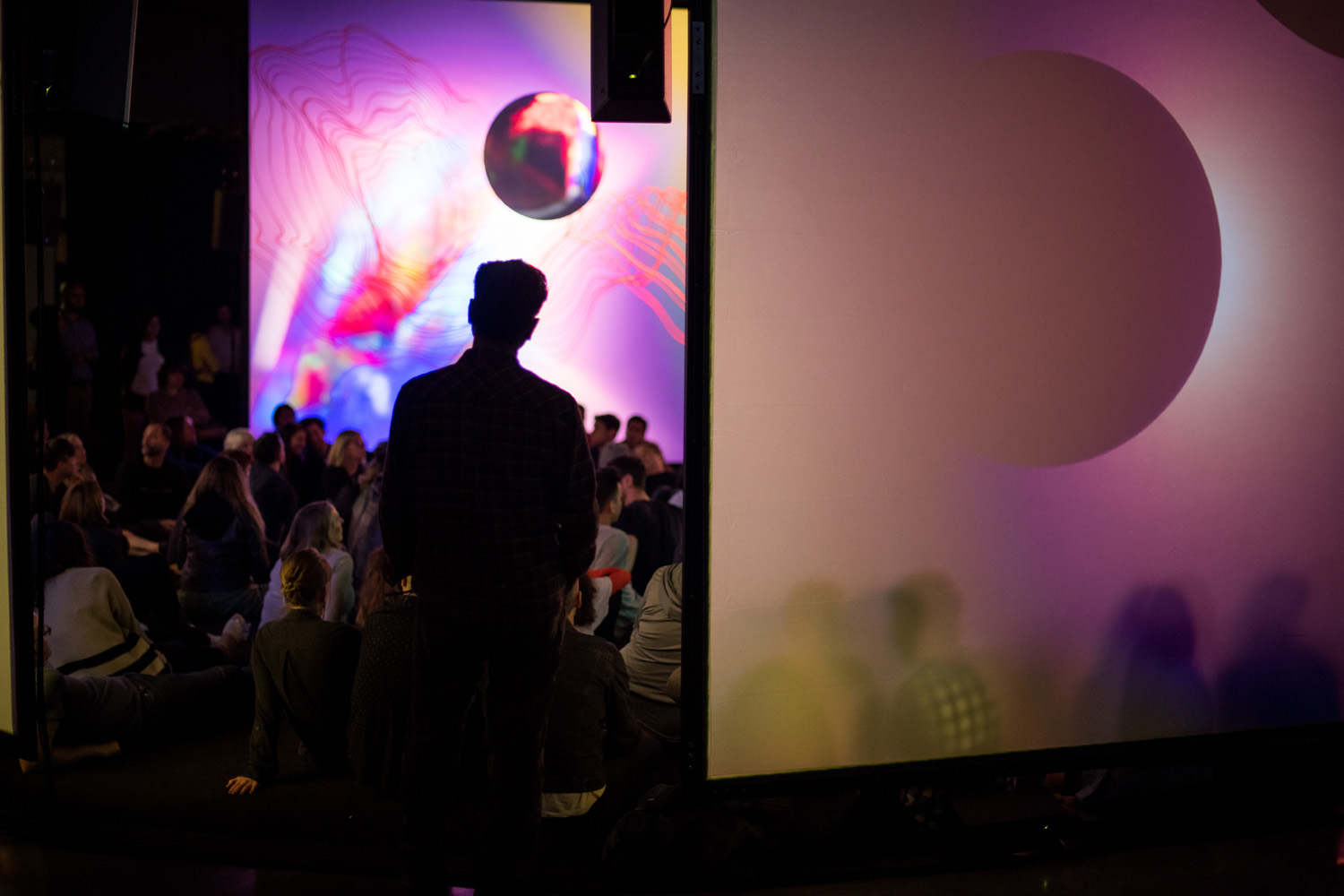 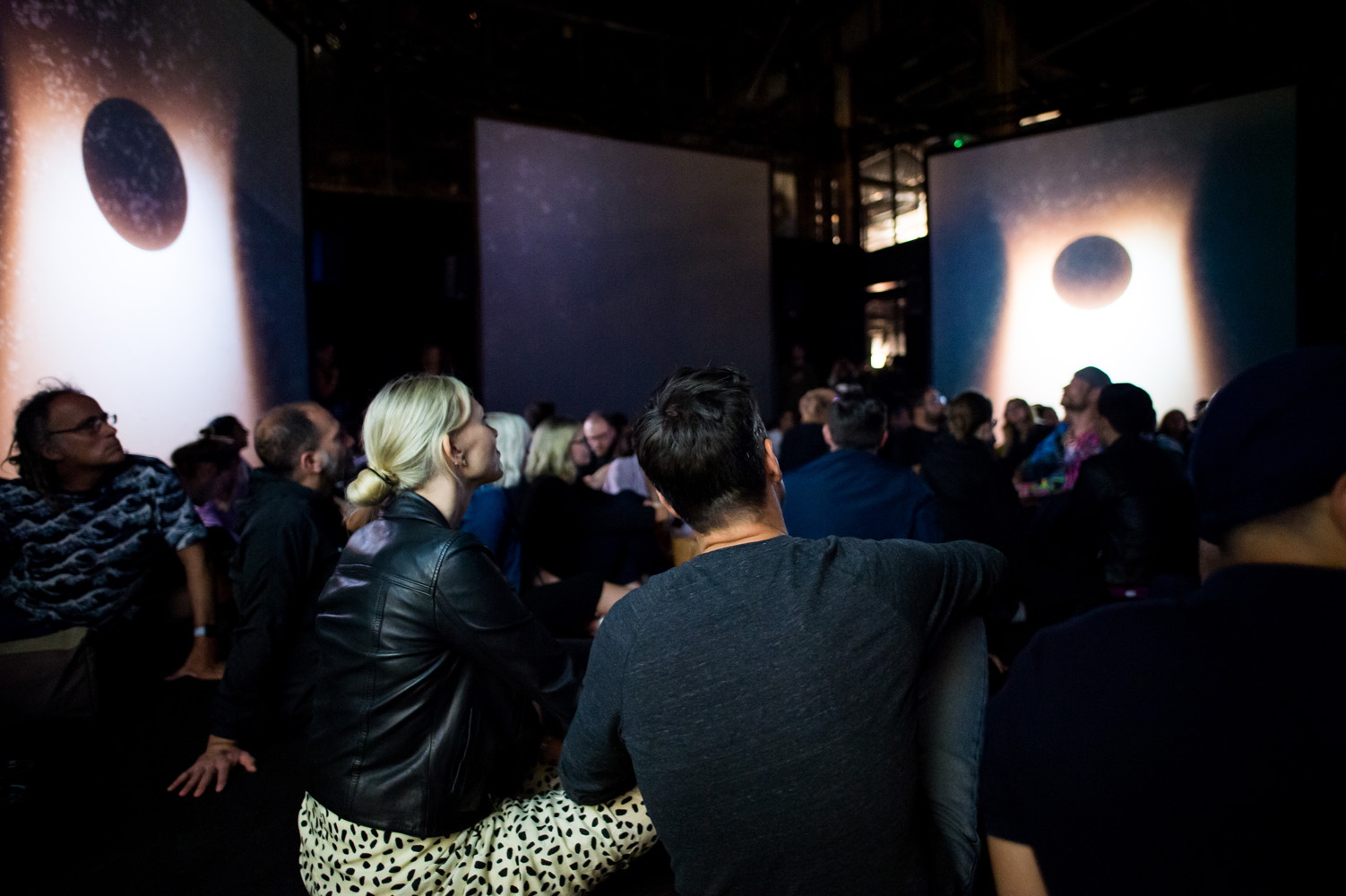 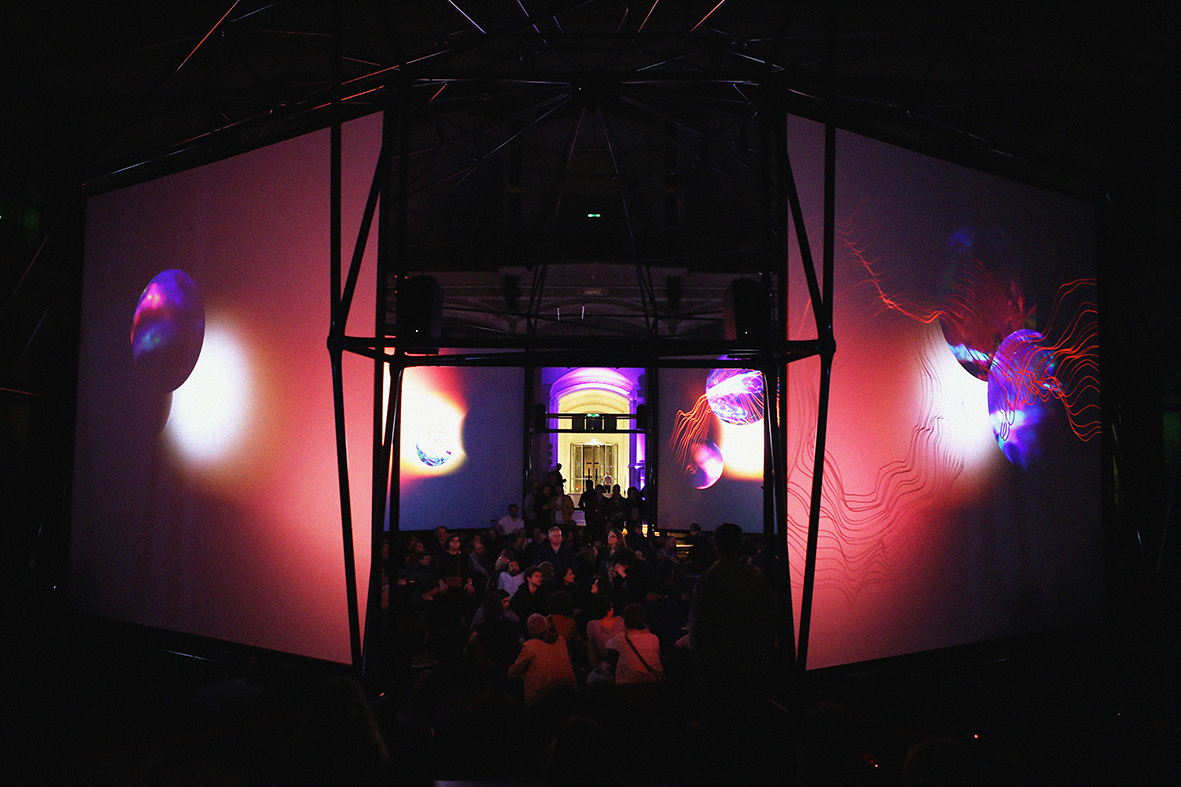 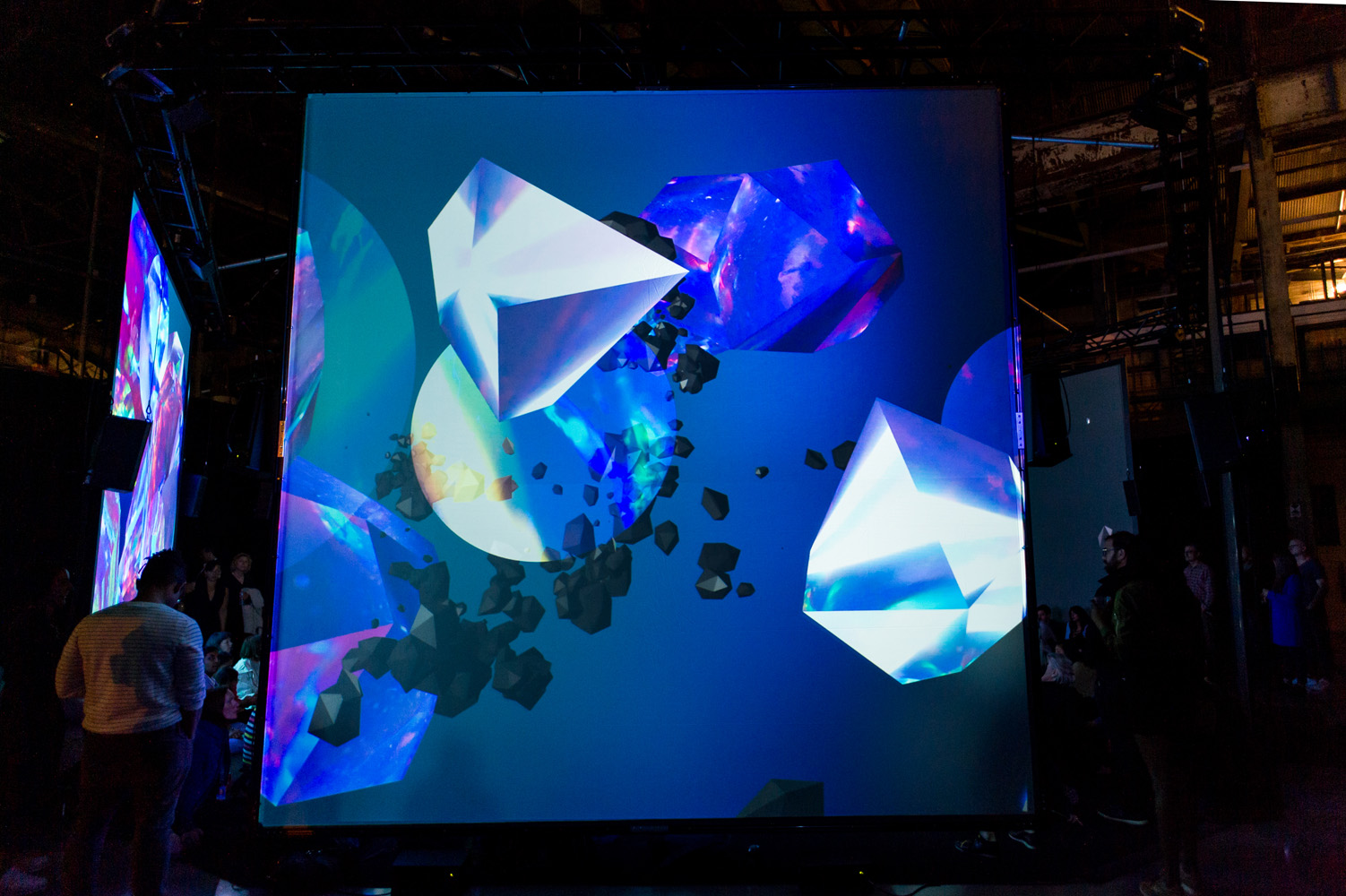 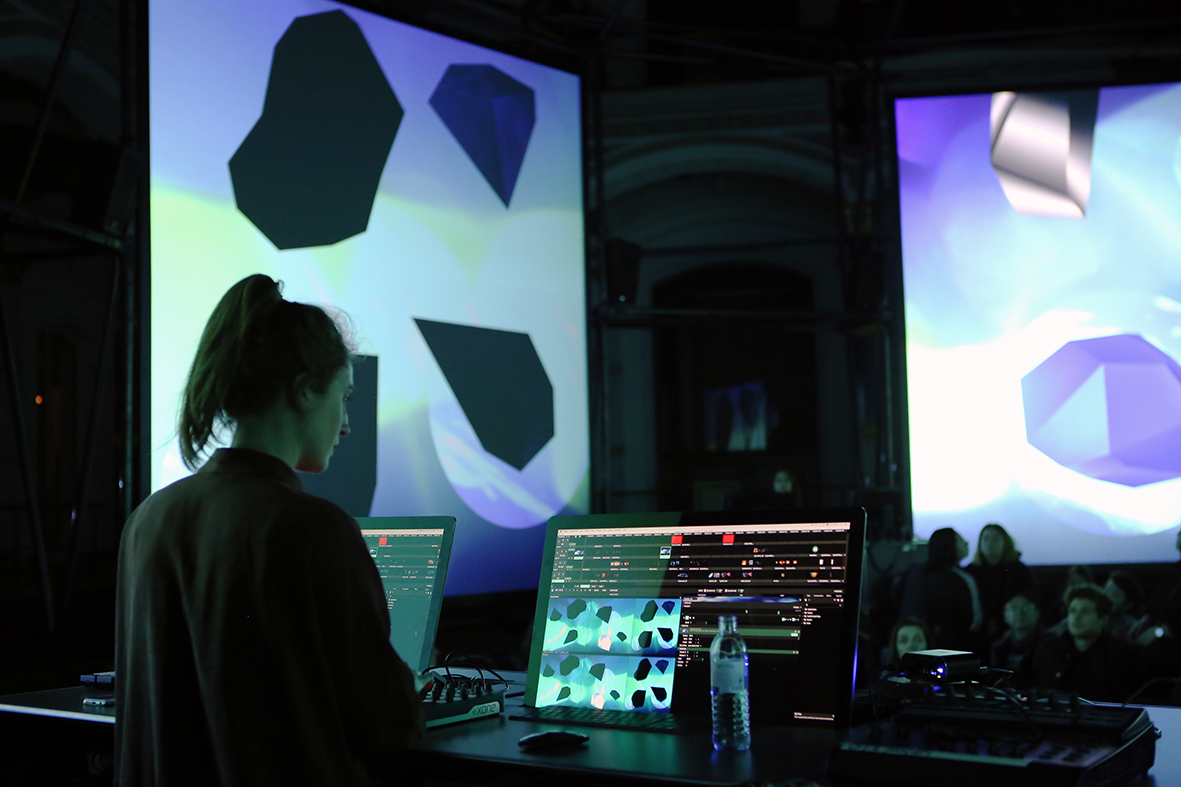 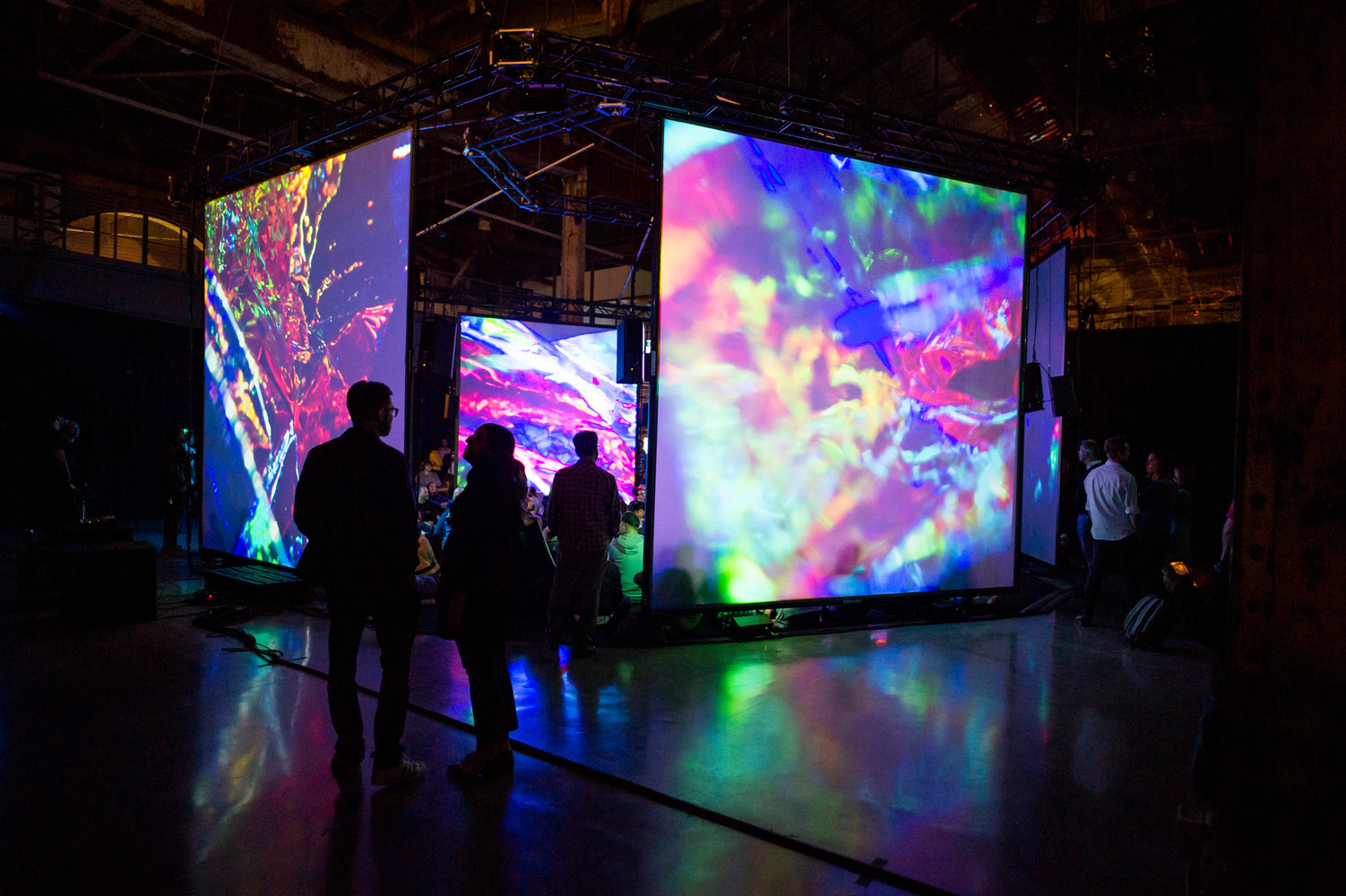 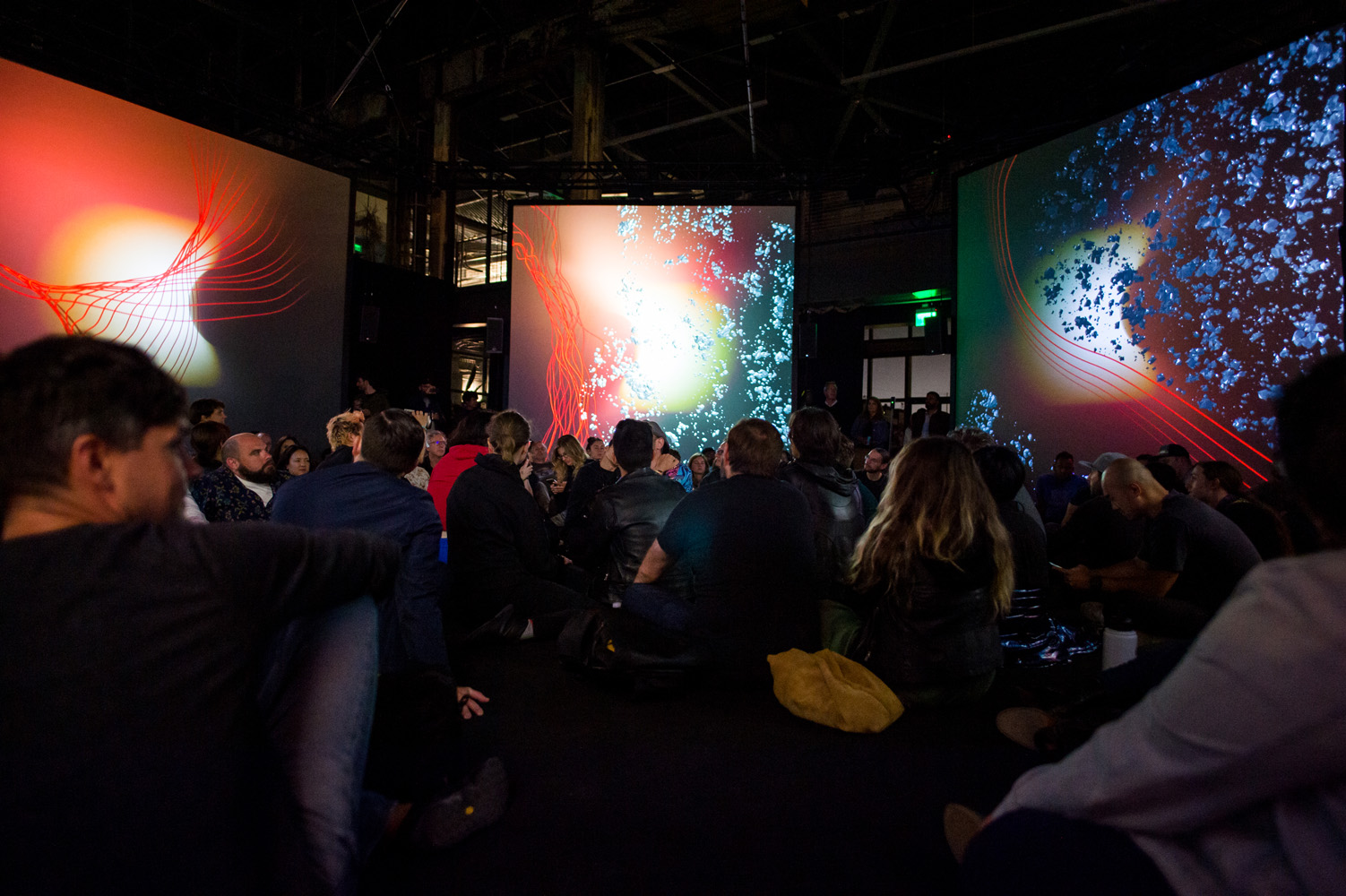 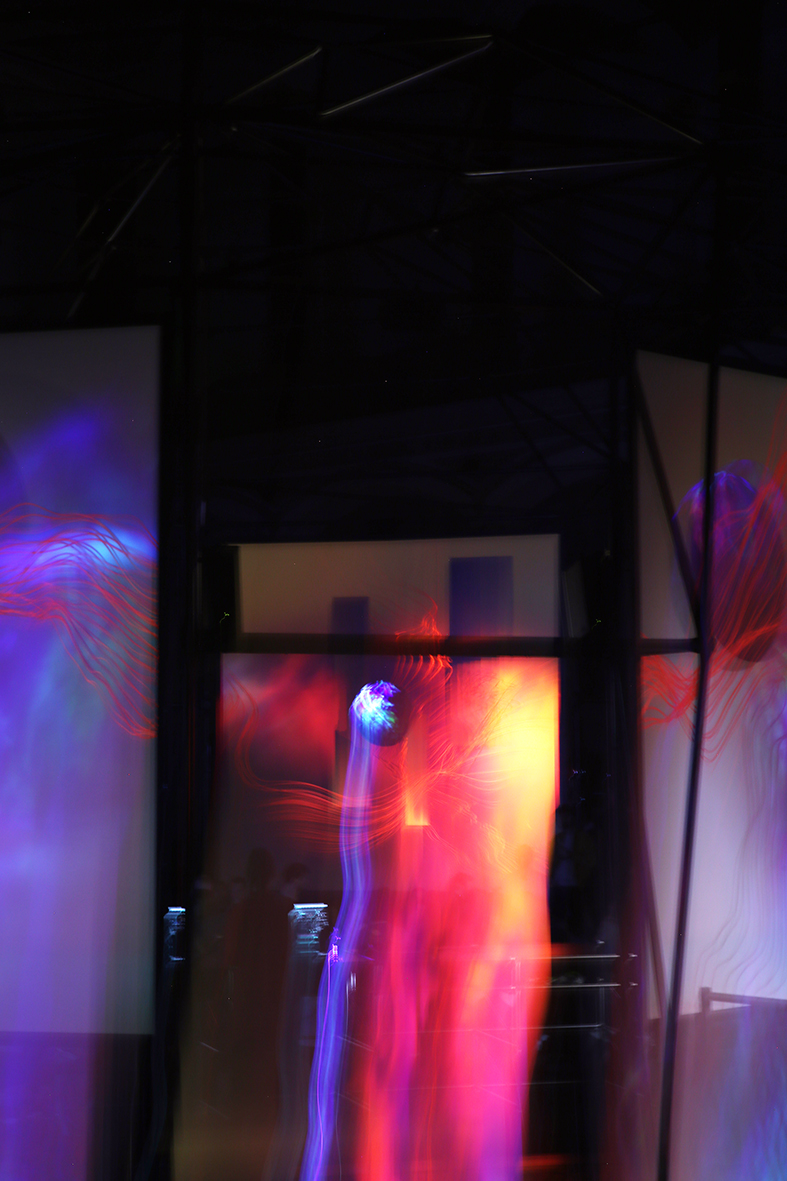 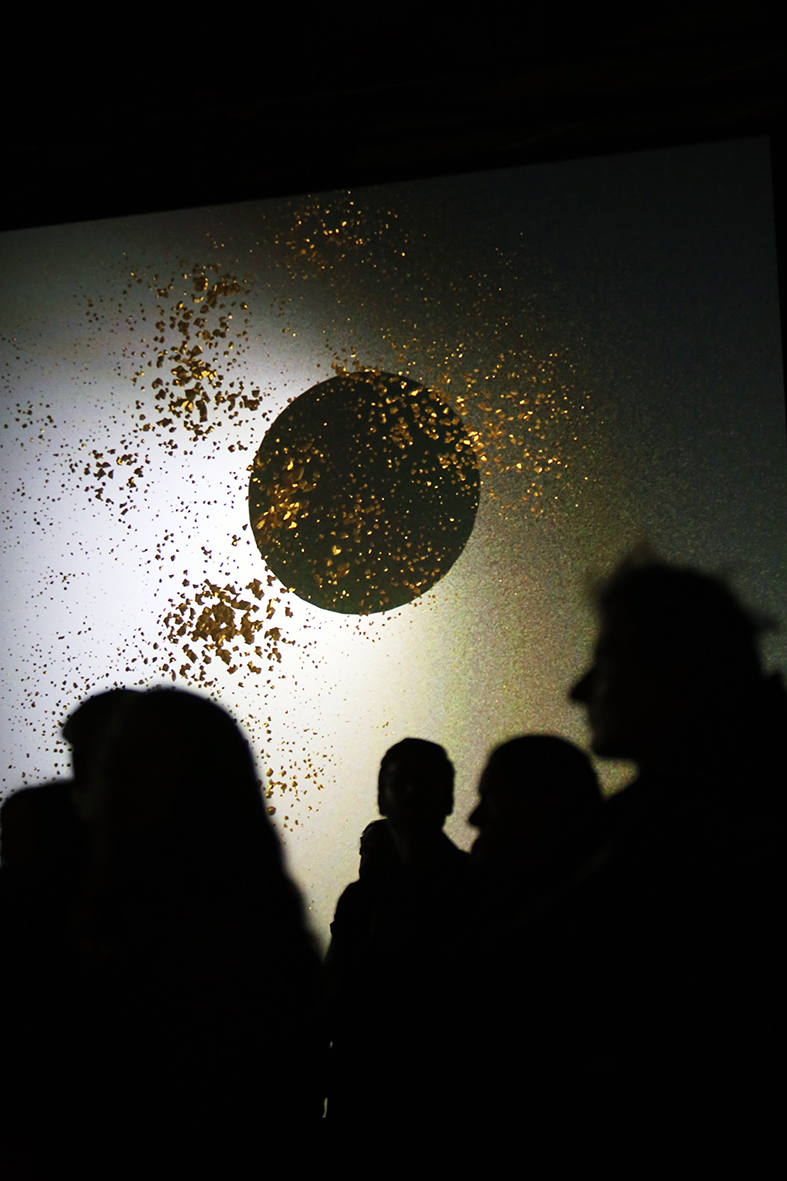 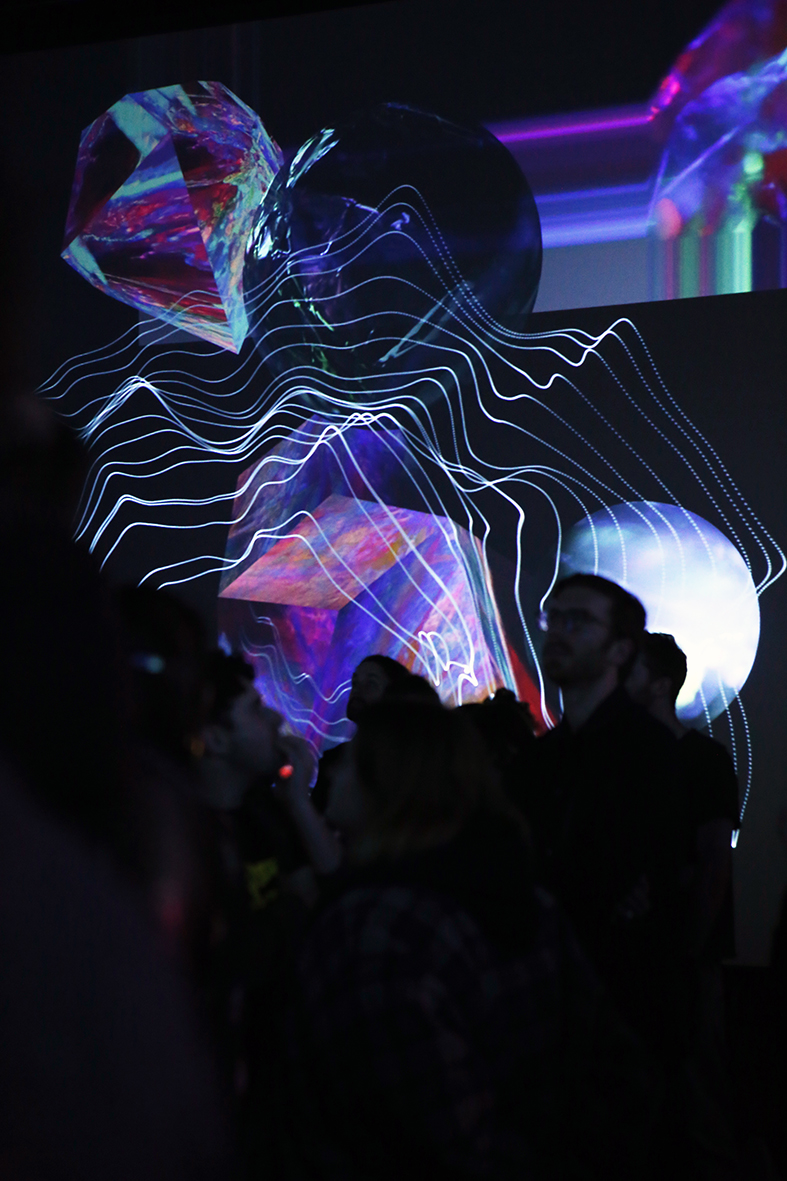 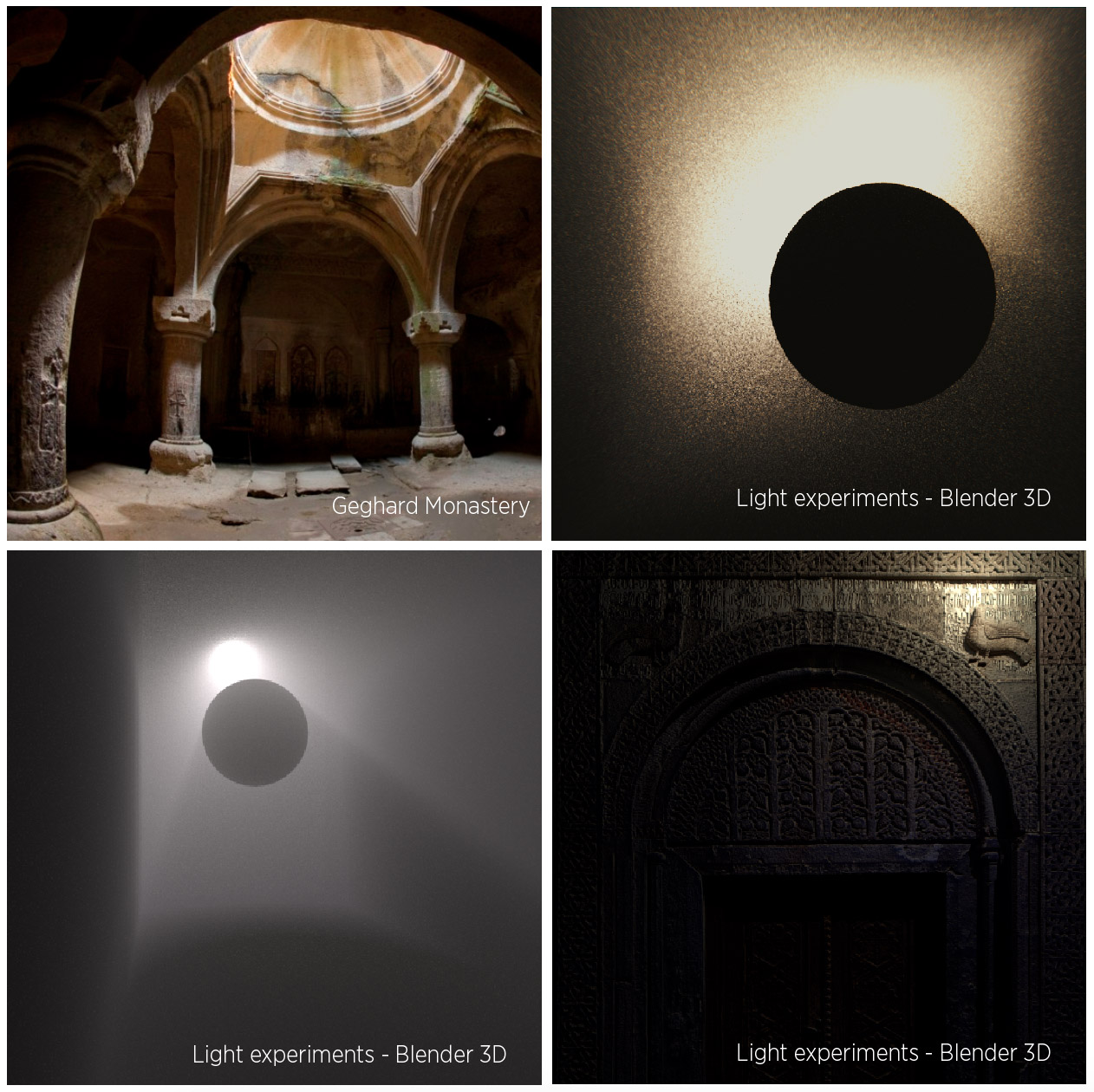 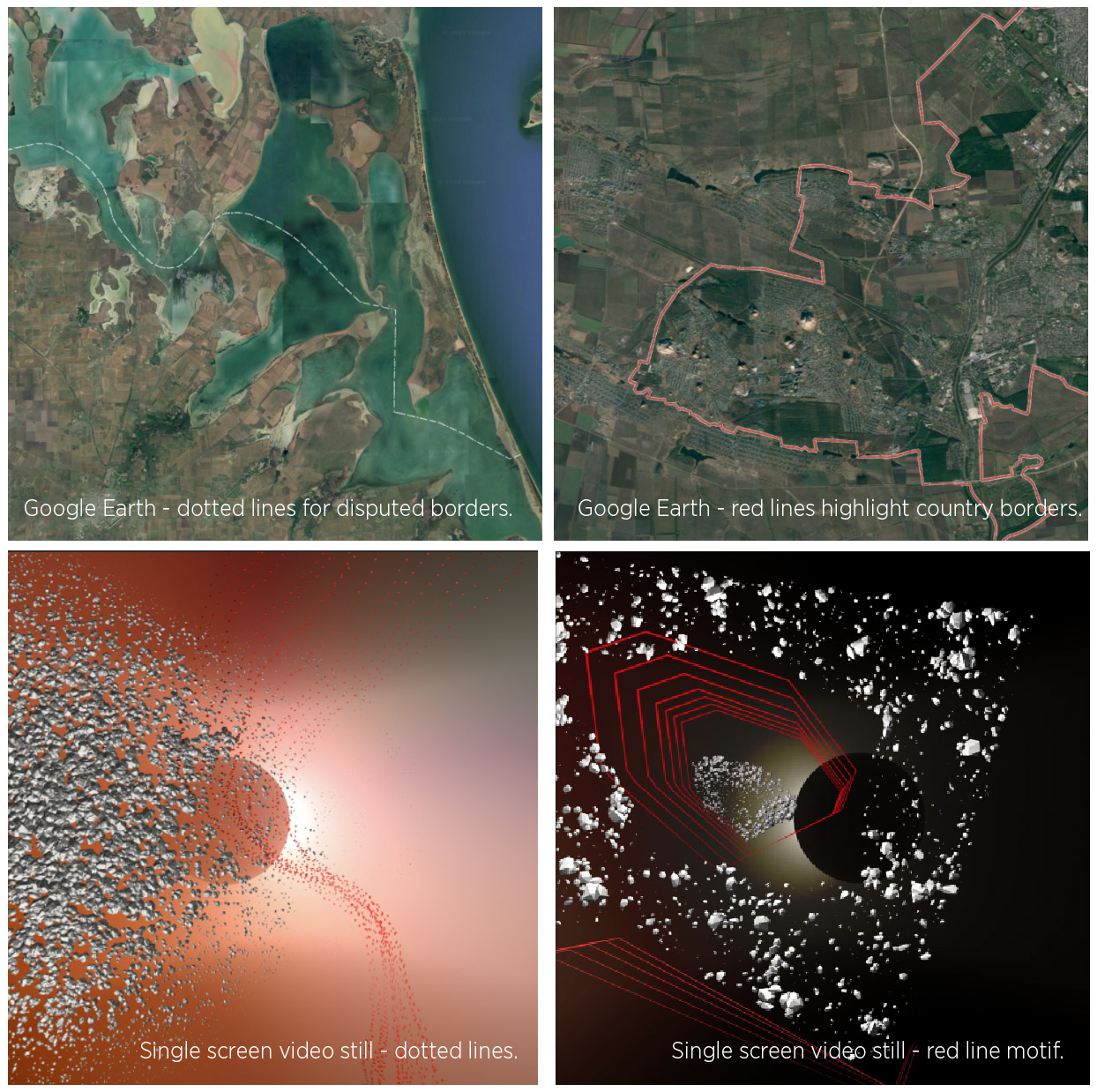 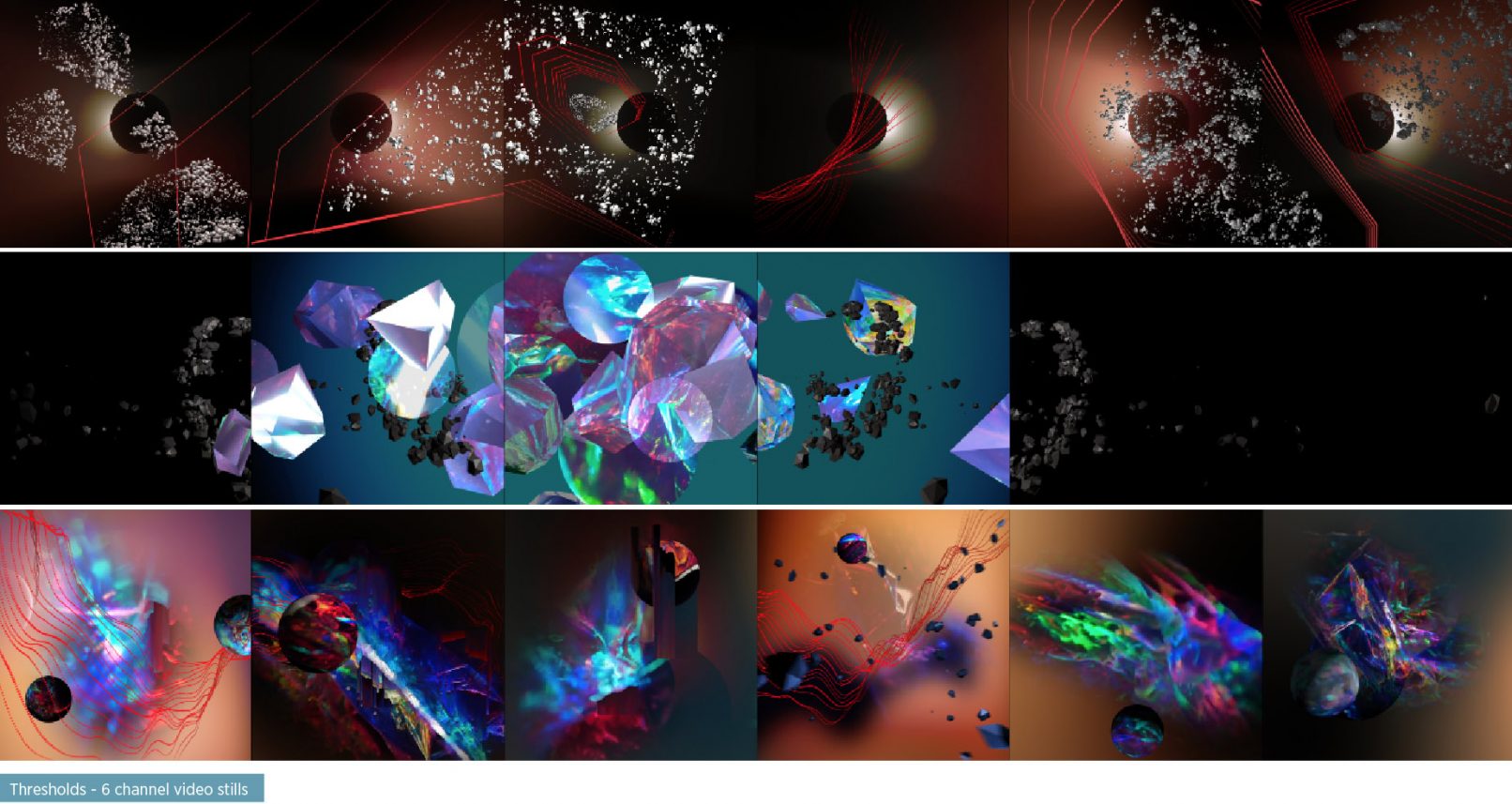